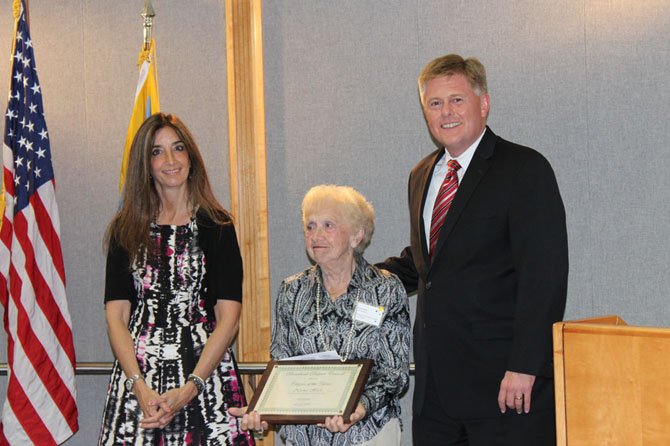 Norma Heck (center) was recognized by the Board of Supervisors on July 29 for her service to the community. She is pictured here receiving an award for being the 2014 Braddock District Citizen of the Year. Photo by Janelle Germanos.

Norma Heck, who has been an owner of a home in North Springfield since 1956, was recognized last week by the Board of Supervisors for her service and dedication to the community.

“Norma is everything I look for in a community leader. She has a great handle on the community as a long time realtor. You always know when Norma’s in the room, in a good way. She has embodied the North Springfield community and the civic association for decades,” Cook said. “No person in the Braddock District who has had more of an imprint in the community over decades like Norma has.”

Heck led many efforts through the years, including the installation of traffic signals, community beautification, and establishing a buffer zone between the Washington Post plant and residences in North Springfield.

“If you could have a poster child for what you would want in a community leader, you would have Norma’s face on the poster.”

“If you could have a poster child for what you would want in a community leader, you would have Norma’s face on the poster,” Cook said.

Heck has been on top of the demographic changes that have occurred in North Springfield, and has fostered a sense of community, Cook said.

“Norma has made it her businesses and her communities business to know what’s happening all around her community and all around Central Springfield,” said Supervisor Jeff McKay (D-Lee District). “Not a lot of people do that.”

Heck was hailed at the meeting as a “constant in the community,” and applauded for caring about issues throughout the county.

Heck said it’s been great being part of watching North Springfield grow, and has loved every moment of it.

“It’s been a wonderful life living in Fairfax County. I thank my community for giving me the opportunity to serve and to meet such wonderful people,” Heck said. “I just can’t say thank you enough.”