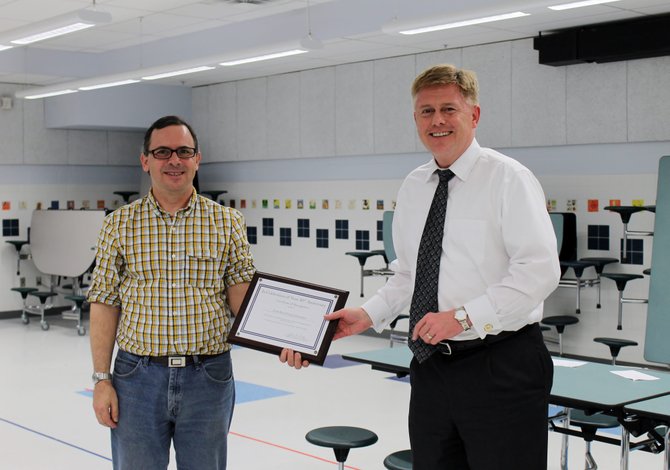 Supervisor John Cook presents the president of the Little Run Citizen’s Association with an award in celebration of the association’s 50th anniversary. Photo by Janelle Germanos.

With a strong neighborhood watch program, a 4th of July parade, and a hayride, the Little Run Citizen’s Association has had a productive 50 years.

Supervisor John Cook (R-Braddock) honored the group at their annual meeting on May 9 in celebration of their 50th anniversary.

"I congratulate the Little Run Citizen's Association on achieving this 50th anniversary milestone," Cook said. "This neighborhood is a prime example of the engaged residents that make Braddock a vibrant, connected community."

Cook was joined by Del. Vivian Watts (D-39), who talked about the recent legislative session in Richmond.

“Unfortunately we aren’t through with our business,” Watts said.

Jeff Yost, the principal of Woodson High School, was also present to answer questions on teen’s well-being and health. Two Woodson students died by suicide earlier this year within one week, which has been difficult for the students, Yost said.

Stress is a major problem for high school students, who sometimes push themselves to take as many Advanced Placement (AP) classes as possible. But Yost often reminds students that they don’t need to take a lot of AP classes in order to be successful.

“They are stressed. It’s the type of area we live in,” Yost said.

Yost also addressed class size, which is currently at a rate of 29 students to one teacher across high schools in Fairfax County.

Little Run residents were encouraged to remain vigilant and supportive of youth in their neighborhood.

In addition to congratulating the group on their anniversary, Cook also addressed the issue of mental health.

“It’s a big issue that we need to address. It’s not just government programs-it’s creating a culture of acceptance and understanding,” Cook said.

Cook also addressed the recent establishment of a meals tax referendum task force, which is currently deciding whether a meals tax should be included on the ballot, and if so, when.

The main question, Cook said, is what to do with the money. One solution could be to use the money for much-needed school renovations, he said.

It’s through decisions like this and tough budget times that the Little Run Citizen’s Association has continued to look out for its neighborhood for the past 50 years, and will continue to do so for years to come.