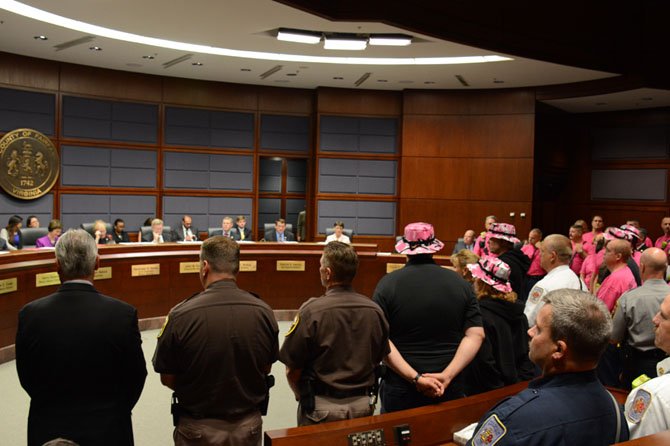 Representatives and supporters of the Guardians of the Ribbon, Pink Heals Tour gather to be recognized by the Board of Supervisors. Photo by Tim Peterson. 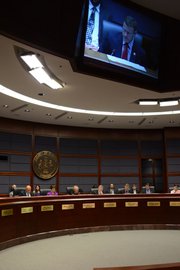 Braddock Supervisor Jeff McKay (D-Lee) addresses the Board of Supervisors on Sept. 9.

When students at the 142 public elementary schools around Fairfax County stayed there the full day on Monday -- the first time in about four decades -- they likely weren’t worried about the cost. That’s between the school board and board of supervisors. Grown-up stuff.

On June 26 this year, the school board voted 10-1 in favor of banning early-dismissal Mondays. Then the board of supervisors followed suit at its Sept. 9 meeting, passing the fiscal year 2015 Revised Budget Plan 8-2, that includes continued budget “guidance” from the FY 2014 carry-over that would help “accommodate” the school change into the 2015-2016 school year.

The county would offer additional money to the schools to help cover the cost of full-day Mondays for both the 2014-2015 and 2015-2016 school years, as well as tentatively extend a three percent increase in the transfer. Both of which would factor into the next school budget.

Prior to the public hearing on the budget plan amendment, Chairman Sharon Bulova opened the day with a slate of formal recognitions and proclamations. The first group recognized was the Guardians of the Ribbon, Pink Heals Tour.

This love-based initiative led by Dave Graybill has brought a fire truck, police car and tour bus -- all head-to-toe pink -- to 440 cities across the United States to bring the needs of women and families in particular in line with community funds. “I give this to you; it’s why we don’t take donations,” said Graybill.

Among other proclamations was the designation of the week of Sept. 8-14 as Suicide Prevention Week in Fairfax County. Supervisor John C Cook (R-Braddock) raised the issue.

“There were 150 suicides in Fairfax County last year,” said Cook. “You compare that to homicides, where there's usually about 14-15. That's one almost every other day. Not every one makes the newspapers, but every single one represents a life that didn't have to be lost. The good news is we have a lot of people, organizations that are doing a lot of good work in prevention.”

Bulova then introduced the line-up of speakers slated to address the board regarding the 2014 carry-over. According to the July 29 review package, that amount is a “non-recurring balance” of $11.22 million.

CO-PRESIDENT of the League of Women Voters Helen Kelly led off describing the effects of new voting equipment funded by the carry-over. Receiving the $3.5 million in 2015 rather than 2016, she said, would not only increase training opportunity for 2016 election day volunteers and thereby potentially reduce lines for the presidential election, but afford a $2.5 budget savings in that same year.

Chief Fairfax County public defender Todd Petit followed, making a case “for the first time” for the county to supplement public defenders’ salaries. “We are state employees,” said Petit, “as is the Sheriff and all of her employees. As are all the magistrates, commonwealth attorneys. This board has supplemented, historically, and continues to supplement those offices today.”

Chairman Bulova responded in her motioning that the defenders’ salaries are a state matter, and that the board would refer Petit’s request to the county’s legislative committee.

“It is a real problem,” Mount Vernon Supervisor Gerry Hyland acknowledged, “if we want our criminal justice system to work for those who can not afford council. Hopefully we'll have success at the state level.”

In all, Bulova made one further funding adjustment and two additional motions. The former Included $535,000 in various environmental initiatives -- applauded my several faith-based activists present, such as Scott Peterson of the Faith Alliance for Climate Solutions.

She then motioned for approval of a one-time funding of $179,000 to support master site analysis and area use recommendation study for Lake Accotink Park. And then came matter of support for FCPS implementing full-day Mondays.

Funded by a salary placeholder of $7.6 million (from the school board), with an additional $600,000 (county supplement), the proposal would bankroll the extra class time. The allocations include increasing health services, changes to School Age Child Care (SACC) and projected losses from changes to recreation and nature centers that would lose Monday programming.

Language in the motion caused Providence Supervisor Linda Smyth to question the amount of latitude being given to the school board.

“That $7.6 million is a very round guestimate,” said Smyth. “The schools are saying they think it's going to be less than that -- they just don't know how much yet. How long does this go on? Every year are we going to be paying for full-day Mondays again?”

But other supervisors clarified the estimating was a necessary evil and meant as a bridge to reaching the 2015-2016 budget-planning.

“Once we get to next year's budget,” said Lee District Supervisor Jeff McKay, “we're going to be weighing this against everything else. This is singularly one of the most important things they could've done.”

Sully Supervisor Michael Frey was similarly frustrated with the way the motion reflected on the board itself, with respect to credibility.

“The fact is we are giving the schools more money for an item that wasn't considered important enough to put into their budget request last spring,” Frey said. “We're rewarding behavior I think is simply picking and choosing what they think is most popular at the moment.”

THE MAJORITY SENTIMENT, however, was that the school board amending its budget request, partially as a result of the excessive snow days last winter, was unique timing, justified and necessary.

Hunter Mill Supervisor Cathy Hudgins echoed the team, role-playing sentiment. She said, “That is the most difficult part for us: We say in one breath that they set their own policy. And we fund it. We’re not setting their policy. They’re now ready to do it, but it is their process.”