Lake Braddock Fastest Ever: ‘They Earned That Title’
Votes

Lake Braddock Fastest Ever: ‘They Earned That Title’ 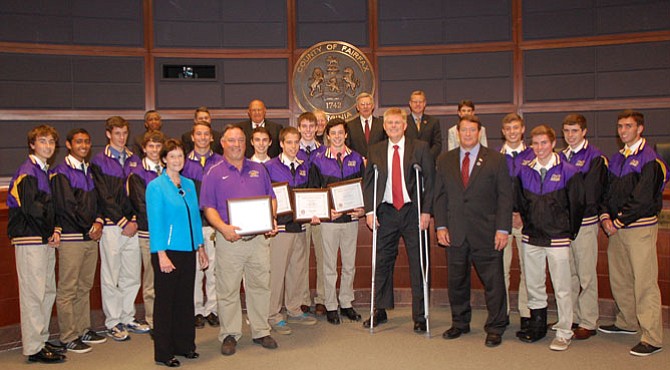 “They earned that title,” said their coach Michael Mangan. “And they worked very hard to get here.”

The boys team ran the fastest average time in the history of the state meet, Mangan said, following up similar statistics in regional meets as well as individual accomplishments.

“Cross country is not a sport, especially on the boys side, when you show up on day one and you’re in front,” said Mangan. “It takes a lot of work to get yourself there.”

Supervisors John C. Cook (R-Braddock) and Pat Herrity (R-Springfield) honored the boys team at the Board of Supervisors hearing at the Fairfax County Government Center on June 2.

Cook said he has honored the team five times in the six years he has served as a Supervisor.

“That says something about the spirit of the program, each generation passes on to the next,” he said, adding that the team comprises “stellar students as well” who have an average grade point average of 3.95.

“A couple of points behind the girls, just to put that in there,” said Cook.

“I want to echo my congratulations,” said Herrity. “It takes a lot of hard work, training, dedication and teamwork to win a state championship.

Coach Mangan said they are also a great group of people. “They are a team that takes care of their younger ones.”

The athletes that attended the ceremony Tuesday represented all 72 boys in the cross country and track programs and all 72 girls as well, said Mangan.

“I have admiration for cross country. It is a great sport, and running is a sport and activity that you do can do your entire life,” said Chairman Sharon Bulova. “Thank you for making us proud. Some pretty impressive statistics that we just heard.”