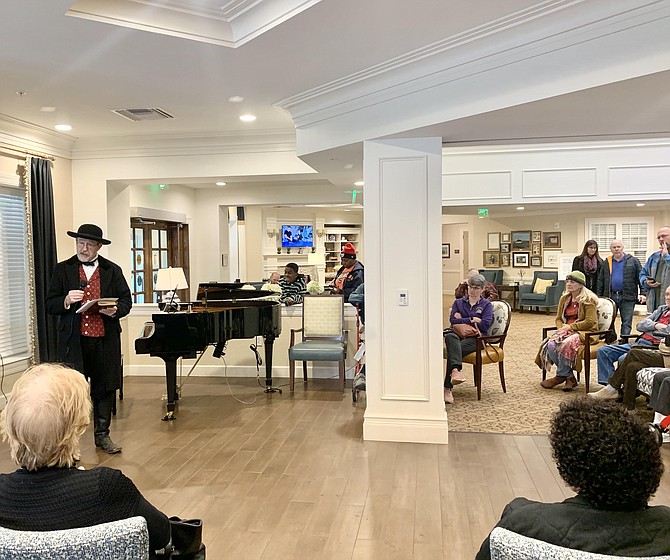 Attendees gather to hear Jon Vrana speak about the history of the Silas Burke House. Photo by Denise Lew/The Connection

The parlor at the Silas Burke House.

The Burke Historical Society, in conjunction with Sunrise Senior Living, held a special event and tours of the Silas Burke House on Sunday, Nov. 10. President of the society, Jon Vrana, presented the history of the Silas Burke house while portraying the original owner, Colonel Silas Burke.

This is the first time that Burke Historical Society has given a public tour of the mansion. Previously, the Society held a “members only event and offered tours in connection with Sunrise events,” said Debi DeLoose, communications chair. Numerous people have long been curious about the interior of the farmhouse with Greek Revival architecture. “It has been, for years, an icon of this area and a connection with the past,” said Vrana.

The original owner, Colonel Paul Silas, was considered an important figure in the area, serving in many positions, including: Lieutenant Colonel, Orange and Alexandria Railroad Company state director, Fairfax Agricultural Society president, county judge, and sheriff, according to the Burke Historical Society. After his death in 1854, his wife Hannah still resided there for many years. The house was eventually owned by a notable individuals including Stilson Hutchins, founder of the Washington Post, and the Simpson/Fowler families, who were some of the founders of Burke Historical Society. In 2015, the house underwent significant renovations under the ownership of Sunrise.

The Board of the Society was pleased with the success of the event. “We didn’t know how many people to expect with this event, but we were thrilled with the attendance and the enthusiasm from the guests. Frankly, we were also pleased that we managed to keep up with so many visitors,” said Brian Slawski, vice president and programs chair.

The Society offers similar events on the last Sunday of each month. “BHS is passionate about sharing local history with local residents and visitors. In the midst of the rush of modern life, BHS shares what this area was like in the past of steam locomotives, water-driven grist mills, horse racing and jousting events, civil war raids, and agricultural county fairs,” said Vrana. Upcoming events include a research seminar on “Reconstructing a Historical Place” and speakers on subjects such as “The National Cemeteries: Honoring the Civil War Dead,” and “Gold in Local History.”

For more information on the Burke Historical Society and its events, visit https://burkehistoricalsociety.org/