Golfing at Burke Lake Gets Seniors Out
Votes

Golfing at Burke Lake Gets Seniors Out

The Burke Lake Seniors Golf Club is about more than just playing a round of golf. 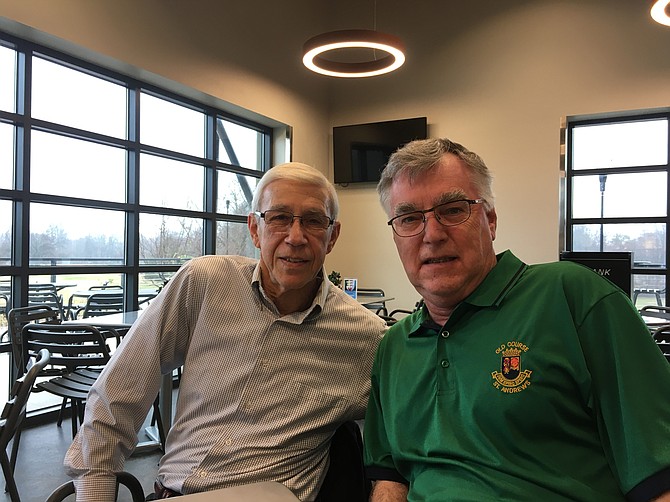 Jerry Gold, left, and Gary Falconer are the head of the social committee in the Burke Lake Seniors Golf Club. Photo by Mike Salmon.

On the surface, a prerequisite for joining something like the Burke Lake Seniors Golf Club would be to know how to play golf. That wasn’t the case

The club is a good place to meet others and gain golf skills.

for Jerry Gold and Gary Falconer, members of the club that weren’t golfers when they joined, but now head the social committee for this club that uses the Burke Lake Golf Course as a social gathering place for seniors more than anything else.

The Burke Lake Golf Course has all the ingredients they need and although it is a public course operated by Fairfax County, the club members developed a sense of community around the course. There is a big club house that serves beer and light foods, the course is only a par-three so walking for a round of golf isn’t too strenuous, and it’s not too costly. Perfect for the retired men and women around the Burke area, and being in the club fosters a social aspect that many seniors don’t have.

Course manager Lewis Musolf has seen that too. When a golfer comes in alone, “they get paired up with others and by the end of the day, they come walking in and they’re best friends,” he said.

One time, while teeing off, one of the club members’ ball sliced off and hit Gold in the knee, and while it was painful at the time, “we’ve been good friends ever since,” he said.

The club started in 1982, and the minimum age is 50, so not everyone’s retired. There are about 126 people in the club, which includes 80-year-old Ellie Anderson, who takes Uber to the course, and keeps her clubs behind the counter at the pro shop. Management doesn’t mind, and it’s that kind of relationship that keeps things lively.

“Golf’s not an aerobic sport but it’s good to get out and walk,” Musolf said.

The golf club has a deal with the course that members of the club staff the positions as starter and marshal throughout the day. The starter sits out front and each golfer has to check in with the starter before starting, and the marshal rides around in a cart to make sure the groups are moving hole to hole, and not backing up the course. In return, they get to play at a senior rate, and talk to people all day. “We get everybody to cross-pollinate whether they like it or not,” said Gold. Some volunteers take those skills and volunteer for other Professional Golfers Association tournaments in the area.

Joining the club is not too expensive, and they have two annual meetings a year for everyone to participate and catch up with other club members they haven’t seen in a while. At the meeting, they have raffles and drawings all day, and most of the items raffled are donated from area businesses that support community activities. The meeting is usually held at PJ Skidoos in Fairfax, so they raffle off a couple of PJ Skidoos meal coupons, meal coupons from Glory Days in Burke, gift cards from Dick’s Sporting Goods at Springfield Town Center, or even a sweatshirt from the Burke Lake Pro Shop.

“The local community has been fantastic,” said Falconer.

The club is always looking for more members, and prospective members can get information at the pro shop about joining. There is no website or social media channels connected with the club, but this is one area they are working on. “It’s going to be part of our discussion this year,” said Gold.

The course at Burke Lake has gone through a couple of changes in the last few years. The club house was rebuilt and expanded to a 4,000-square-foot facility with additional seating and food serving capabilities, and the driving range was expanded as well. The putting green was moved and the back nine and front nine were switched around, so what used to be the first tee is now number 10 and the old number 10 tee is now the first tee. The reason for the switch, according to Musolf, was to increase the sales at the snack bar, and increase pedestrian traffic through that area. “Our sales have increased dramatically,” he said.

Currently, there is work going on to improve the drainage around the driving range and the drainage on hole eight, and the 15th tee is being redesigned to let in more sunlight so things grow better.