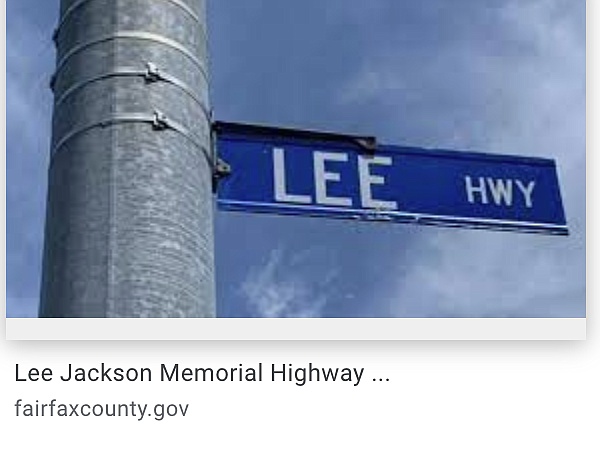 Recapping the actions since July 2021, the Board charged the Task Force with studying the highway names and recommending to them whether or not to change the names of one or both roadways and provide recommendations on suggested alternative names if such a decision is made. It is noteworthy that if the Board wished to rename one or both roads, they would submit a formal request to the Commonwealth Transportation Board and agree to cover the expense of changing the street signs.

According to Tom Biesiadny, director of the Fairfax County Transportation Department, the cost to manufacture and change the signs alone, 171 signs on 14.1 miles of Lee Highway and 55 signs along 8.43 miles of Lee-Jackson Memorial Highway, would cost between $1 million and $4.2 million.

The Board asked staff to explain the existing County process for changing the name of a secondary road in a neighborhood; provide information about changing the names of subdivisions for the benefit of citizens interested in making those changes; coordinate with neighboring jurisdictions that are undertaking name change processes and return to the Board with information about those processes; and provide a report about the history of the naming and renaming of the Magisterial Districts. The Task Force solicited feedback through various methods, including an online survey, email, phone calls, in-person and virtual community listening sessions, and paper surveys at Fairfax County Libraries.

At the Confederate Names Task Force community input meeting held virtually on Nov. 1, caller Colin Smith said that during the last 18 months, he'd seen dozens of small businesses close, more than he'd ever seen in the three decades that he lived in the County. "I believe whatever money is being discussed, potentially earmarked for changing street names through signs, should be spent in more appropriate arenas," he said. He named low-interest loans for small businesses, school renovations, and public parks.

David Collier said that he understood there was a cost associated with it, but he considered the names a wrong that has been in place for a long time, and it was worthy of the investment. As for the historical perspective argument and that people want to cement history, he said, "I think ... sometimes you need to turn the page and move on. It is clear it is offensive to many. "

Jeffrey Herron said that he echoed the sentiment that we don't need to spend "our hard-earned tax money to change street names."

Luella Benedetto said that in her estimation, the County should not be naming things after wars and their participants, generals, and so forth at all, on any side.

Pending the Task Force's recommendation at their Nov. 30 meeting, the next steps could be to begin drafting the report and developing a timeline, leading to a meeting in January 2022 with the Board.

As for what other jurisdictions are doing, on July 17, 2021, the Arlington County Board voted to officially rename US Route 29 Lee Highway to Langston Boulevard within the boundaries of Arlington County between North Lynn Street and the City of Falls Church.

Route 309/"Lee Highway"/"Old Lee Highway" should be renamed Cherry Hill Road, according to a resolution approved by the Arlington County Board on Oct. 19, 2021. The Resolution recommends ultimate approval by the Commonwealth Transportation Board (CTB).

Under state law, the locality bears all costs associated with producing, placing, and maintaining new street signage. Arlington estimated the cost of the renaming to be up to $300,000.