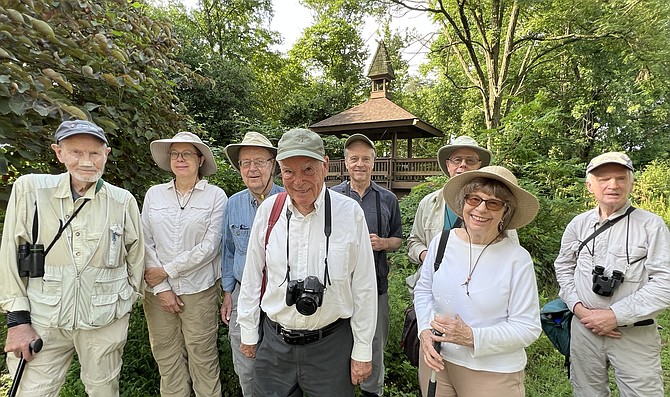 If one has a need for scientific data, or just has a hankering to know what birds, butterflies, dragonflies, other wildlife and plants are found in the Occoquan Bay and Meadowood area of Mason Neck, and Lorton, one on-going survey can tell you — down to the species and month of emergence. Now in its 33rd year, the collected surveys, conducted monthly by citizen scientist volunteers, provide an overall picture of the area’s ecology. It’s believed to be the longest running nature survey of its kind in the United States.

What began as a bird survey in the Occoquan Bay National Wildlife Refuge in 1989, evolved to become a general survey of wildlife activity and plants over a wider area of Mason Neck and Lorton. Over the history of the effort, survey originator and project director Jim Waggener reports managing over 8,800 survey hours, with volunteers contributing over 65,000 hours.  The volunteers with various levels of expertise come from local nature groups, such as the Audubon Society of Northern Virginia, the Northern Virginia Bird Club, Audubon Naturalist Society, Virginia Master Naturalists, other regional organizations, and unaffiliated people who have an interest in one or more of the surveyed subjects. Their efforts have documented over 2,200 species of wildlife and plants.

Waggener reports that, “Surveys have documented the first regional records of many rare species, e.g., American White Pelican, Mississippi Kite, Ash-throated Flycatcher, as well as wildlife listed by Virginia’s Division of Natural Heritage as very rare, like Frosted Elfin (butterfly) and Fine-lined Emerald (dragonfly).  Survey data has been the basis for local/regional checklists and identification guides. Data from surveys of the old Lorton Prison contributed to decisions shaping that site’s reuse, and preservation of natural resources in the new Laurel Hill community.  Surveys have led to greater public understanding of each site’s unique ecological value, and for Occoquan Bay and Meadowood, were an important element in successful public action to preserve these properties.”

It’s a low-key and friendly atmosphere as the team gathers for the start of a butterfly/dragonfly count on late summer mid-week morning. Team members are similarly dressed, ready for the field, with birding binoculars and camera lenses certain to coax out the finest identifying detail on a butterfly or dragonfly. The group members, some who attend regularly, are mostly those of an age who have earned the time to spend hours in the field observing wild things. At the start time, Waggener announces the plan for the event and logistics. Frequent participant Joanne Hutton makes sure newcomers aren’t lost as the team moves as a group to the first couple of sites in the vicinity, before splitting off alone or in small groups to cover more territory.  Hutton calls their attention to a retention pond, often frequented by dragonflies. Their inspection is rewarded with sighting of a large number of Needham’s skimmers (Libellula needhami) and Eastern pond hawks (Erythema’s simplicicollis), types of dragonflies abundant in our area. Excitement grows when someone spots what might be an uncommonly seen Unicorn Clubtail dragonfly (Arigomphus villosipes). Someone calls for Joel Goldman, who has seen the species before, to confirm the identification.

Individual members often call on others with a particular expertise or carrying a powerful camera to verify what’s seen. The team will regroup after three hours to share sightings and their count. On this day a trio of newcomers creates a stir announcing a possible sighting of a Dusted Skipper butterfly (Atrytonopsis Hanna) which regulars know is not on the list of past sightings, raising doubts about the sighting. Photos are passed, identification arguments are made and final judgment is delayed for further examination and comparison of specimen photos. In the end, the verdict is Northern Cloudywing Skipper (Thorybes pylades), not the Dusted, but all appreciated a good puzzle and the newcomer trio is pleased they’ve added a new species to the “expected” butterfly checklist.

For the day, 22 species of butterflies and 21 species of dragonflies are counted, along with 51 species of birds. It’s been another satisfying morning hunting down the small treasures that renowned entomologist Dr. Douglas Tallamy calls the “little things that run the world.”

Waggener, who has a minor in zoology but a major interest in the natural world says, “What we do, while potentially very useful to scientists, can be interesting, educational, satisfying, and just plain fun.” Waggener invites adults with an interest in volunteering for one of the monthly surveys to contact him directly at jwagge3093@aol.com. Students under 18 years old may attend with an adult. Dates, and more information, along with survey results are available on the Audubon website at www.audubonva.org.

And on a more serious note, Waggener adds, “The world needs our immediate attention; citizen science can be a source of raw material for crafting solutions to its ills.”