Lee District is Changing Its Name to Franconia
Votes

Lee District is Changing Its Name to Franconia 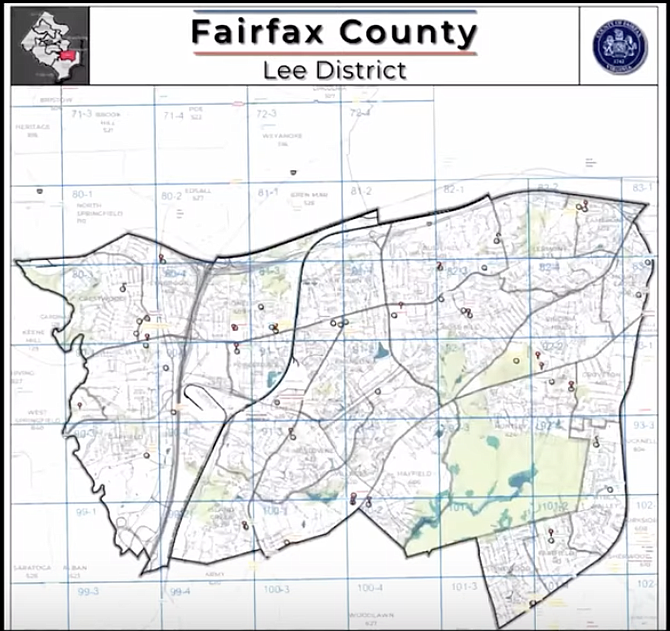 The Fairfax County Board of Supervisors overwhelmingly approved two motions to change the name of the Lee District to Franconia, presented by Supervisor Rodney Lusk (D- Lee) during Board Matters at the Tuesday, June 28 meeting.

"I've not worn this pin before at this board meeting, but what you'll see is that this pin says Lee District underneath," said Lusk. "I'm wearing this pen today in the hopes that I will not wear this pin again because I know the board's decision here is going to result in a change in the name of this district," he said.

Lusk's first motion that the board approved directs the county executive to "initiate the process of formally changing the name of the Lee District to the Franconia District and report back to the board on both any administrative changes necessary to facilitate that change; as well as a timeline for adoption."

His second approved motion directs the county executive to "assign the appropriate staff to undertake outreach to businesses, nonprofits, and community organizations and any other entity that may be impacted by this change and recommend possible strategies for supporting them in that transition."

Before presenting the motions, Lusk said that for many in the Lee District, the name evokes visions of the old gravel pits, the sound of footsteps along the boardwalk at Huntley Meadows, or pride in the history of Laurel Grove School. Lusk said that the name Lee District also evokes another set of images for many others.

"Whether by design or by accident, and we may never know by which, the name stands as a lasting monument to the most recognizable Confederate figure in history," Lusk said. He added that just because the connotation isn't celebrated anymore doesn't mean that the sounds of slavery, racism, segregation, and discrimination have gone away.

Lusk added that Franconia was the overwhelming preference of the hundreds of individuals who participated in discussions, three town halls, and the Redistricting Advisory Committee process over the previous two and a half years. Lusk told of discussing with the community the district's history, the etymology of the current name, what it represented, and what alternatives they would like to see considered.

Lusk recognized that it was a decision that not everyone would agree with or be excited about, but they had a seat at the table, and their viewpoints were heard. "After long contemplation, I've come to the personal conclusion that the name of the Lee District should be changed to Franconia District, and I'm asking for my colleagues' concurrence today to make that happen." Following Lusk's reading of the motions, Chairman Jeffrey C. McKay (D-at-large) seconded.

Supervisor Pat Herrity (R-Springfield) questioned the cost of the name change process. "I don't think we're going to decide on cost, but I think we need to understand what the cost is," he said. Lusk clarified that when directing the county executive to come back and let the board know of any administrative issues, costs would fall under that designation. "I will support taking this to the next step," Herrity said.

As a former resident of Franconia, Supervisor Walter Alcorn  said Lusk had made "a very good choice on the name."

McKay said he understood that Lee District has three district areas, Richmond Highway, Franconia, and central Springfield, and residents may not all have connections to Franconia. However, there was "a lot of rich history in Franconia," and it was one of the first established communities. McKay liked the name Franconia, recognizing a geographic area as the root of the community's history.

"Lee District has evolved over a lot of time, and I think, frankly, and rightly moved away from some of the connotations. The people who made decisions about district names and their motivations may be very different than the people that we are today and the people that we represent," McKay said.